Jim Thompson House and Museum is a museum that once was a house. It was originally designed by both Jim Thompson and his Thai architect. In order to view the architecture of the place, it’s best to go for the guided tour. During the tour, you will be able to see his collection of artefacts and paintings. Please note that photography is restricted in the house.

Jim Thompson was intrigued by the “degrees of subtlety on the seemingly stylized faces”. This “Limestone torso of the Buddha” was found in “7th or 8th century” at Lopburi Province in Central Thailand.

A brief summary of Jim Thompson

Jim Thompson was an English Businessman who revitalised the silk industry during the 1950s – 1960s.

During the second world war, he was in the military and was supposed to be posted to Thailand. Shortly before he arrived, Japan has already surrendered. While he was in Thailand, he grew fondly in love with the country and its people.

He had initially joined a group of investors to buy The Oriental Hotel in Bangkok but he left the group due to differences. Instead, he found the art of making silk, which fascinates and allures him.

Jim Thompson was known for his establishment of Thai Silk Company.

It is so beautiful to see Thai silk in a wide range of vibrant colours.

Processing the silk is generally much slower mainly because its hand-woven and vegetable dyes were used in the process to add colours to it. I guess what makes this Thai silk exquisite is the meticulous process!

Here’s a quick summary of the process. Silkmoth lays eggs which are then hatched. The hatched silkworms will be fed with fresh mulberry leaves. After 35 days approximately, they are ready to spin into a cocoon. Once the cocoon solidifies, the farmers will then kill most of these caterpillars by heat, leaving a batch for reproduction for the next cycle.

Harvested silkworms’ cocoons are soaked in boiling which will soften the fibres on the cocoons. These fibres will, in turn, unwound to produce a continuous thread.

These fibres, when strung together, form a continuous thread that is sturdy.

This lady is stringing the silkworm cocoon thread.

How about dining here?

Pineapple rice in a shape of a pyramid. It’s pleasant with its sweet aroma from the pineapple and savoury taste from the egg.

A simple soup that complements the pineapple rice. Flavour of it is very close to Singaporean’s Chinese Carrot soup.

Opening Hours: 9:00 am to 6:00 pm, every day with the last Guided Tour at 6:00 p.m.*
Nearest Station: National Stadium
(The museum is opposite National Stadium and diagonally opposite Siam Square 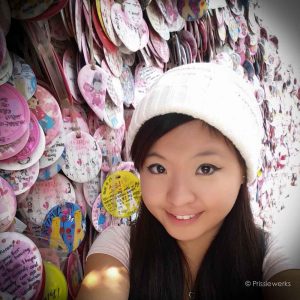